This recipe makes the best fluffy sourdough cinnamon rolls that taste great with or without frosting. There are a couple of tricks for getting the moist, gooey cinnamon rolls you’re looking for and I’m sharing them below!

Besides a fluffy pancake or chocolate donuts, cinnamon rolls are this girls best friend.

These sourdough cinnamon rolls are soft, tender, and buttery. Their swirls have the perfect, flaky texture.

My kids love them smothered in a simple icing, but I also like them with a simple dusting of powdered sugar.

I love that these are an overnight cinnamon roll and they require very little attention the next morning.

If you are looking for other overnight breakfast recipes, but sure to whip up my overnight oatmeal bake or our favorite overnight sausage, egg, and crescent roll casserole!

How to make these simple Sourdough Cinnamon Rolls

Can you make sourdough cinnamon rolls ahead of time?

Yes! You can make cinnamon rolls in advance and bake them off the next morning.

If you want your sourdough cinnamon rolls to be ready to bake, make your rolls, put them in the baking dish, and pop them in the refrigerator for up to 8 hours.

Pull them out, set them on top of your stove while it preheats and then bake as directed.

After the final rise, add your cinnamon sugar filling, roll, slice, and place in a pan.

To get the most decadent sourdough cinnamon rolls, pour 1/4 cup of heavy cream over your rolls in the pan.

Bake them according to the recipe and enjoy the most moist rolls ever!

There are several different methods you can use for frosting your rolls.

I prefer the powdered sugar method, but many people like to add maple flavoring or even brewed coffee to create a different flavor.

Place leftover cinnamon rolls in an airtight container and store on the counter for 3 days.

If you put the leftover rolls in the refrigerator, you can store them for up to 5 days.

How do you freeze cinnamon rolls?

Allow the rolls to cool completely and place a layer of plastic wrap over the rolls. Follow that with a layer of tin foil.

Cinnamon rolls may be kept in the freezer for 2-3 months.

When you are ready to use them, pull them out the night before.

The morning you are ready to eat them, remove the plastic wrap, tap the top of the rolls with damp hands to keep them from drying out, cover in foil, and warm up for 30 minutes at 300° F.

Did you make this recipe? Please RATE THE RECIPE below! 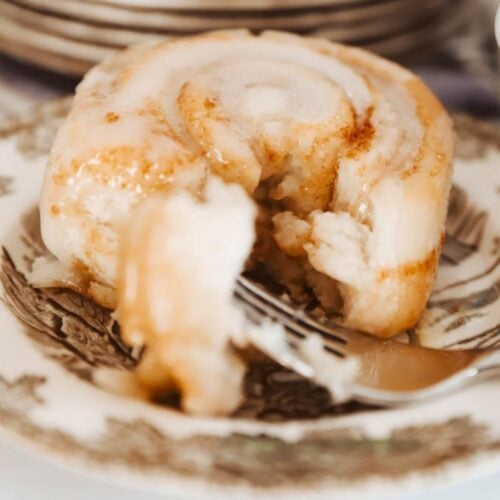 Place leftover cinnamon rolls in an airtight container and store on the counter for 3 days. If you put the leftover rolls in the refrigerator, you can store them for up to 5 days.
Keyword sourdough cinnamon rolls
114 shares 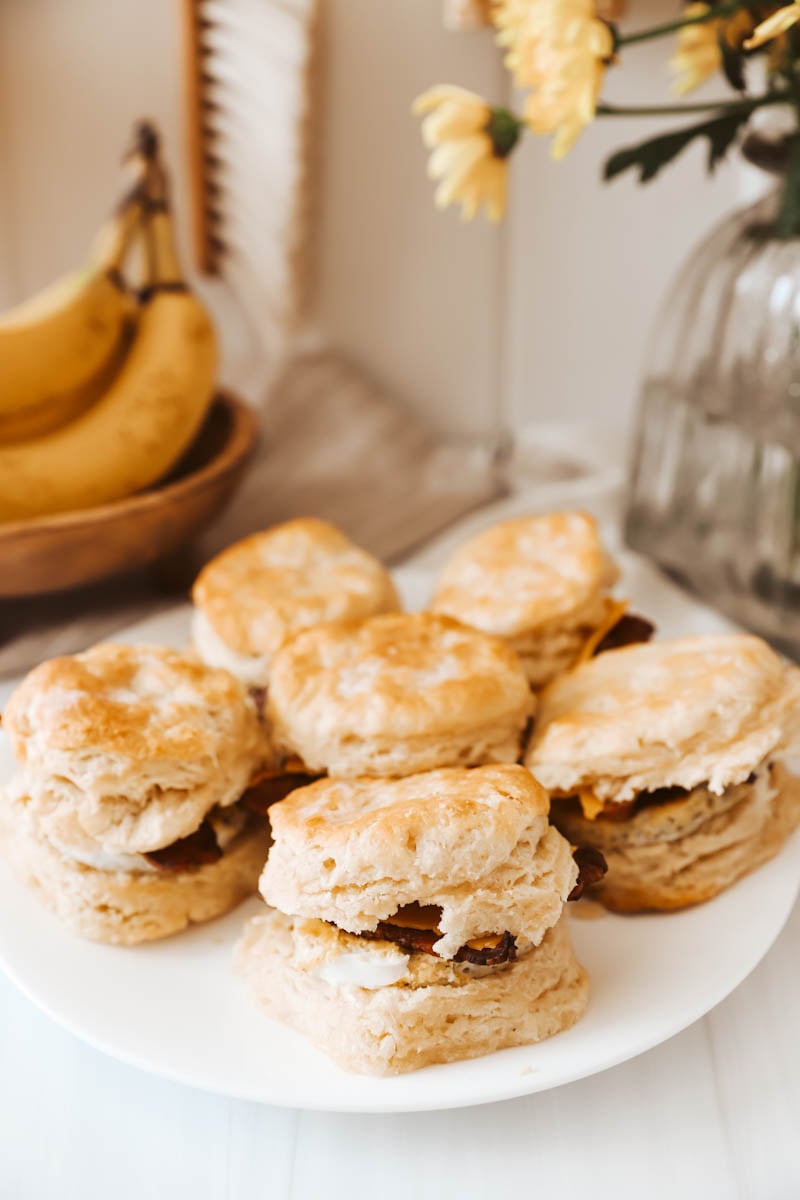 Delicious, flaky biscuits that are filled with crispy bacon, fluffy egg, and cheese… yes, please! This breakfast can be made ahead and enjoyed all week long making it the perfect breakfast for busy mornings. This really is the ultimate breakfast sandwich and one that my kids request regularly. I even have a kiddo that asks… 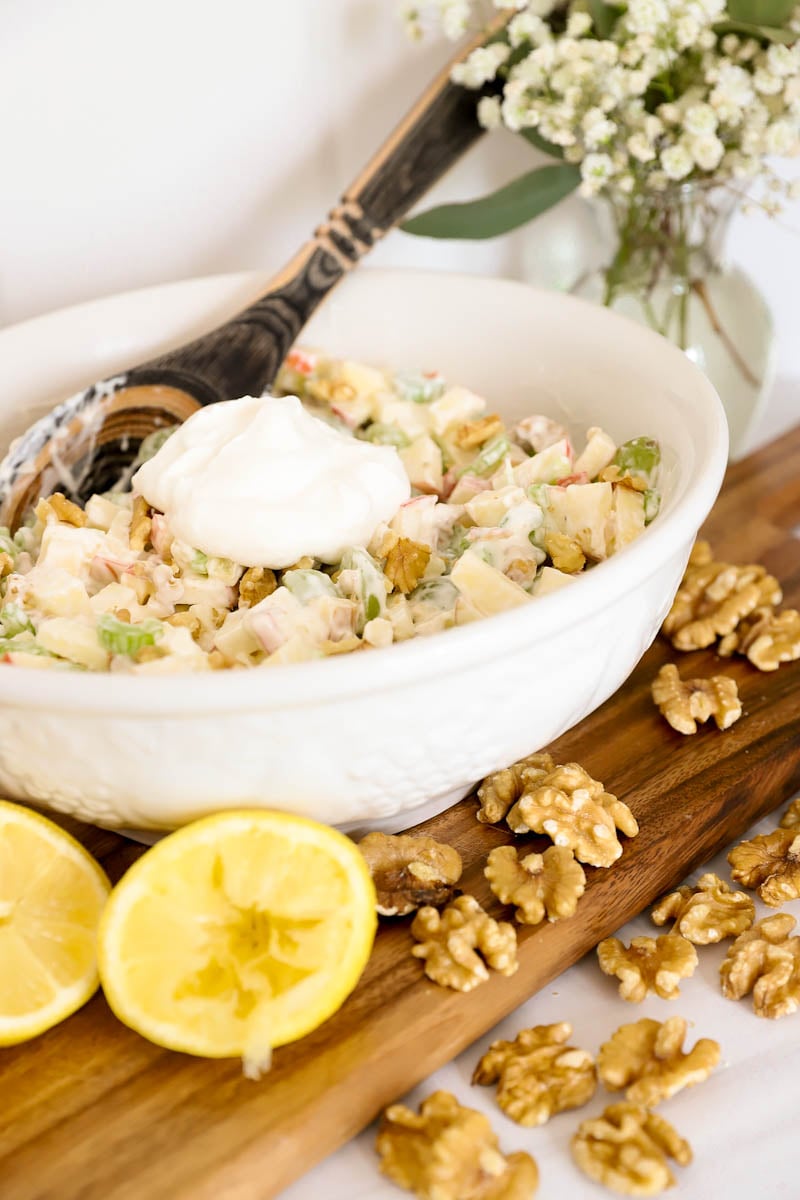 This classic Waldorf salad with grapes is fresh and uses wholesome ingredients that requires so little time and makes hungry bellies happy. Salads are such a nice addition to any dinner table. Summer salads full of fresh ingredients are even more appetizing. Like so many easy pasta dishes, such as my white sauce chicken pasta,… 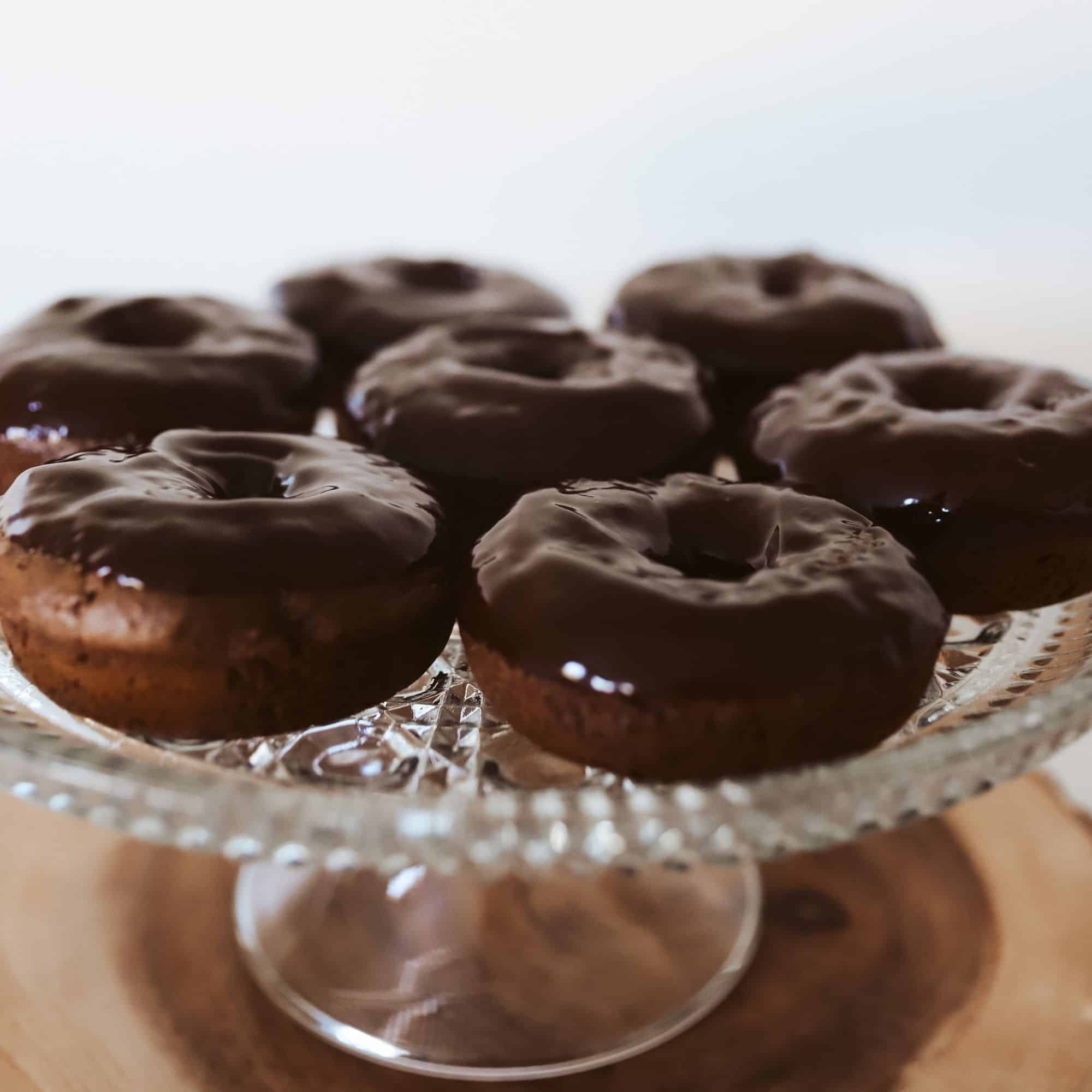 If your family loves moist, cakey donuts, then they will love these chocolate glazed donuts. Not only are they easy to throw together, but they also bake up very quickly. I grew up not liking chocolate. Can you believe it? I didn’t like chocolate bars, chocolate ice cream, or chocolate cake. Rest assured, that isn’t… 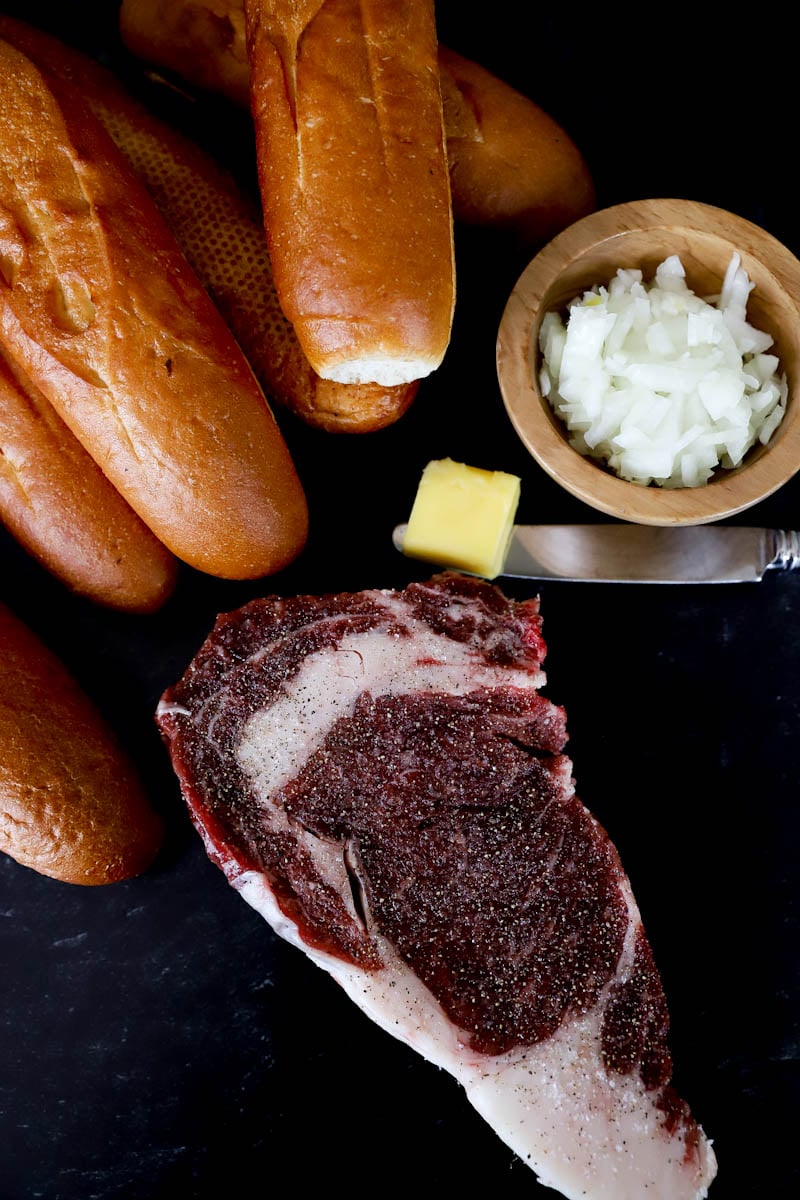 The most important part of your steak, aside from the perfect way get those flavorful exteriors while maintaining a juice interior, is what to serve with the steak. These are the BEST side dishes to serve with your perfect steak. Steak is one of those things that is a staple in our home. While it… 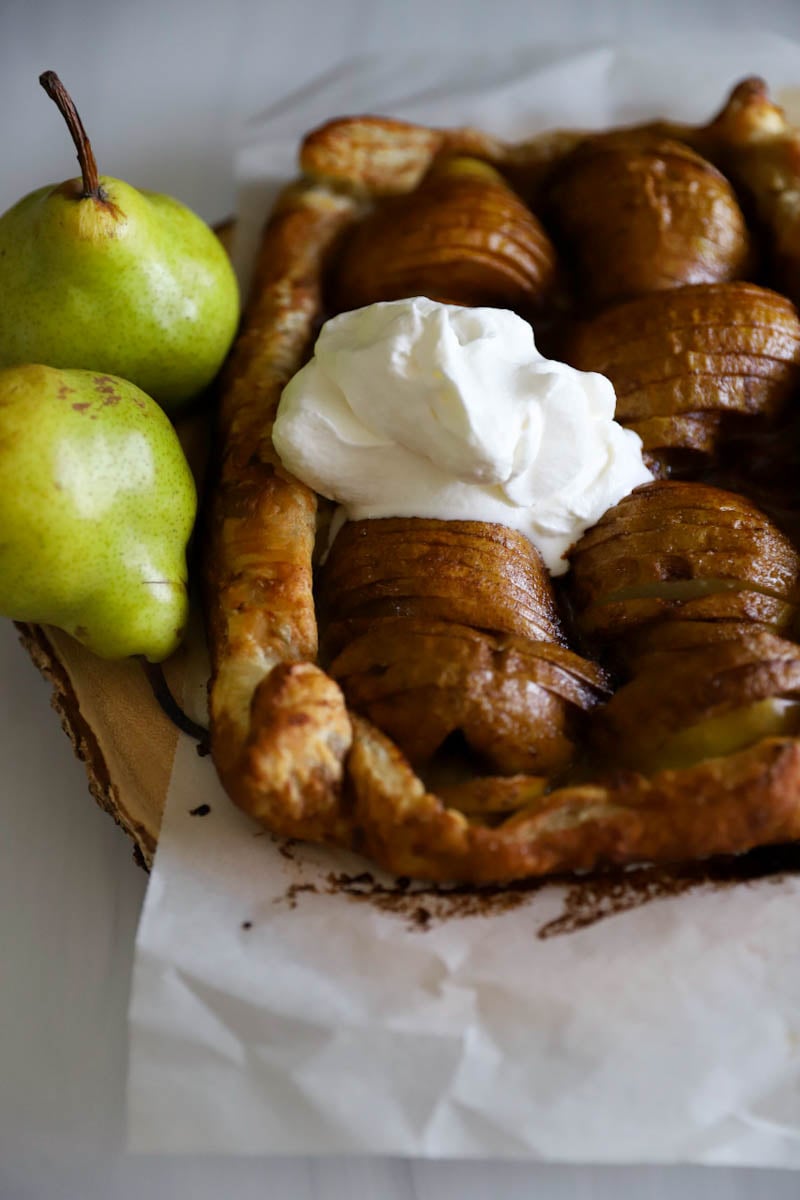 This rustic pear galette recipe is a great fall dessert featuring pear slices atop a delicious galette dough baked until golden brown. This pear dessert is easy and will quickly become a family favorite! If you are anything like my family, we are constantly on the go in the summer months, soaking up every croaking…

I have such a sweet treat for you today!  I am always on the lookout for new, fun ways to celebrate those special moments.  This time, it’s for Valentine’s Day, but you can make these for all kinds of occasions- birthdays, holidays, random parties.   Festive Cookie Straws! The cookies are super simple to make…